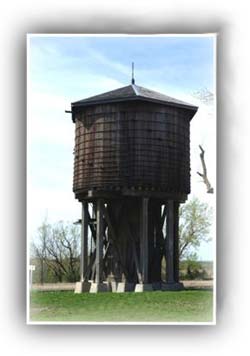 In 1885, Beaumont was established as a railroad town. The water tower, built in 1885, stands across from the historic Hotel Beaumont and is the only one still in use in the United States. The former roundhouse, built in 1890 across from the hotel, employed 90 people. Beaumont was established as the overhaul station between St. Louis and Wichita. The Beaumont Hotel, then known, as the Summit Hotel, was the highest point on the Frisco Line from Ellsworth, Kansas to St. Louis. Guests included cattle barons from Texas and Oklahoma and the elite of the Frisco Railroad. It was used as headquarters for those who shipped or brought cattle in to fatten. While the cattle barons and ranchers stayed in the hotel, the cowboys camped outside.

The rich Kansas Bluestem grew abundantly in the Flint Hills, resulting in hundreds of thousands of cattle being shipped by rail from Oklahoma, Texas and New Mexico. There were holding pens for 9,000 head of cattle across from the hotel. At this time, Beaumont was a typica1 old western town, with four eastbound and four westbound trains a day.

Mr. J. C. Squier bought the Hotel Beaumont in 1953 and added running water and heat, removed the old rope ladders used for fire escapes, and added the decks, giving a beautiful view of the Flint Hills. For the convenience of cattle buyers, a grass airstrip was put in for planes to taxi up the street and park south of the hotel and today it has been renovated as a modern bed and breakfast and still welcomes pilots and travelers to rest "for a spell."

We invite you to come in, visit us, and learn more of the history of Beaumont Kansas, and experience firsthand the charm and beauty of the Flint Hills.

The Beaumont Hotel was created in 1879 as a stagecoach and railroad stop to shelter weary pioneers when the railroad brought cattle barons and frontier society to The Beaumont.

Built in 1885 for Frisco Railroad steam engines in Beaumont, the water tower provided water for the railroad roundhouse and cattle shipping operation. Listed on the National Register of Historic Places, it is the oldest wooden water tower still operating in America.

We currently do not have any events for Beaumont, Kansas in our database. If you know of events taking place, please add the event
.

Things to do near Beaumont, KS