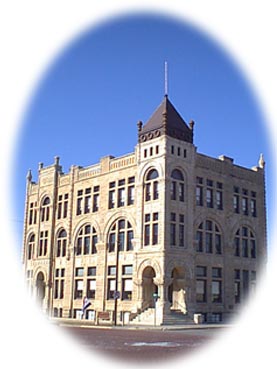 Ness City is well equipped to serve the traveling public as well as those working temporarily in the area. The Derrick Inn, a modern motel, is a domed structure with indoor swimming pool. A private club and a fine restaurant is there also, and there are several other first class restaurants.

Ross Calhoun, the most vigorous of all town promoters is remembered as the father of Ness City. He came to the area about 1877, and during a county seat fight with Sidney (about a mile south of present Ness City) he was so adamant about locating the county seat in the exact center of the county that he tied rags to the wagon wheels in order to count the revolutions and miles. His efforts were rewarded as Ness City won the county seat. Calhoun deeded a block in Ness City for a courthouse and jail. It was not until 1886, however, that Ness City became an incorporated town.

The Ness County Country Club is the first golf course in the United States to be equipped with OmniSport artificial greens. The nine-hole course is open to the public for a $5.00 green fee.

To Ness City calendar of events

Things to do near Ness City, KS

Known as "Coronary Hill" among the local players, the Osborne Country Club first opened in 1930. Don't let the $2 "all-you-c...

Bill Hougland transferred to Beloit High School his junior year in 1947. He then took the team to its first state championshi...