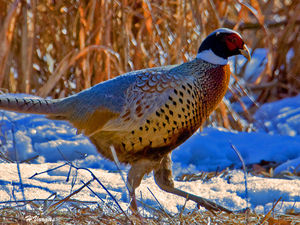 Kansas Pheasant Hunting – Down but not out

It’s no secret to those who hunt pheasant and other upland birds that the successive years of drought in the central part of the United States has hurt bird populations.

The forecast for Pheasant Hunting in Kansas was not a “flag waver”.  But be advised that Kansas will still probably rank 3rd or 4th in the top states to hunt for pheasant.  Kansas Department of Wildlife, Parks and Tourism has said that Tramadol no prescription bird populations were down but that it looks like some decent hunting will be found in “area pockets” of the Northwest and North Central parts of Kansas.  That some areas of the northern sections of the Flint Hills might also produce some birds.  Something that Kansas definitely has in it’s favor is it’s Walk In Hunting Acreage that is open to the public.

Here is a link to the Kansas Fall Walk In Hunting Atlas and a short article on Graham County in Kansas which has over 40,000 acres of walk in hunting.

Cresent lake National Wildlife Refuge has  45,818 acres of rolling grass covered sandhills.  This unique area was created from the wind blown sands of an ancient sea

Some of our Friends