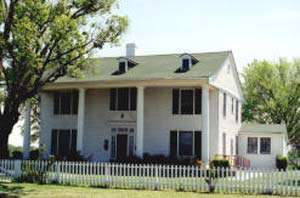 The Sam Rayburn House Museum is the home of the late "Mister Sam," who served as Speaker of the U.S. House of Representatives longer than any other in American history. Listed on the National Register of Historic Places, the house was built in 1916 and restored to 1961 condition, the year Sam Rayburn died, with original furniture, china, and personal effects.

Sam Rayburn, one of the most powerful and influential politicians of the 20th century, was in his second of 24 terms in the U.S. House of Representatives when he built a two-story home in 1916 on a 125-acre farm just west of Bonham. The modest 12-room home cost $2,800 to build.

Rayburn's parents, his brother Tom and sister Lucinda moved into the home soon after it was built. Throughout his congressional tenure, Rayburn traveled from Washington to his Fannin County refuge to relax amid familiar hometown faces and enjoy the pleasure of working on the farm or on his nearby 900-acre ranch.

The home was remodeled and enlarged in 1934. At that time, a fourth pillar was added to the frontal facade, and a kitchen was added a few years later. The home exists today as a 20th-century time capsule that preserves the Rayburn family home in the state it existed at the time of Rayburn's death in 1961. The home contains all original Rayburn family furnishings.

In October 1999, after undergoing a full year of restoration in Houston, Sam Rayburn's 1947 Cadillac was returned to the museum. The vehicle was a gift to Rayburn from 142 congressmen at the end of his first term as speaker of the U.S. House of Representatives.

After Rayburn's death, his home, land and posessions were left to the Sam Rayburn Foundation. His sister lived in the house until her death in 1969. The foundation deeded the home to the state in 1972. The home opened as a museum administered by the Texas Historical Commission in 1975.

The Bridgeport Historical Museum houses artifacts and displays that showcase the city's history from the late 19th century. E...