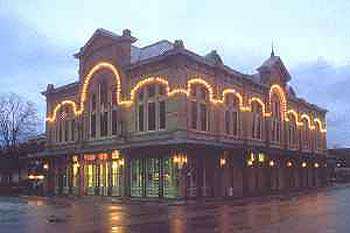 Erected in 1886 by cattleman and banker Robert Stafford, this beautiful, fully-restored building is the largest flat-floored opera house in the state. Through the years, the building served as a performing arts facility, as apartments and as one of the first Ford Automobile Dealerships in the country. Listed on the National Regsiter of Historic Places, the facility today houses office space, a small museum and plays host to professionally produced dinner theater during the season from October to June.

Tour attractions include a French Mansard copper roof, painted curtains, and a small museum featuring the original bank vault. The Visitors Center (CCVB), Chamber of Commerce, Columbus Industrial Development Corporation and Columbus Historical Preservation Trust, Inc. are all located on the first floor. Both the downstairs general meeting room and the upstairs facility are available for weddings, galas and other special events.

We currently do not have any events for Columbus, Texas in our database. If you know of events taking place, please add the event
.

Things to do Opera Houses near Columbus, TX