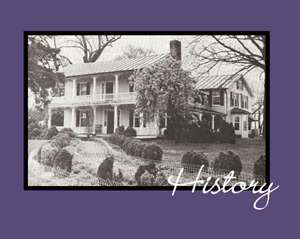 The 1812 Hitching Post was the birthplace of four-term N. C. Lieutenant Governor W. D. Turner in 1865 and was also owned by North Carolina Senator Columbus Vance Henkel in the early to mid-1900's. Patrick Waldron, an artist, designer, and historian, has creatively restored the lovely home and offers their home for events, and specializes in outdoor, full-service weddings with custom designed decor.

The first owner of record for the home now known as the 1812 Hitching Post was George Locke. He owned a sawmill at Locke's Shoals along Rocky Creek. Wilfred Turner became the owner of the home about 1840. Mr. Turner and Mr. Notley Tomlin developed Turnersburg Mill in 1849 on Rocky Creek where many of the tapestries currently in the home were milled. The youngest son of Wilfred Turner, Wilfred Dent Turner, was born here. He was Lt. Governor of North Carolina from 1901 to 1905.

In 1940, Turnersburg was bought by C. V. Henkel and Robert Spilman. After a short while, C. V. Henkel bought Robert Spilman's interest and also bought the Wilfred Turner house. C. V. and his mother restored and enlarged the former Wilfred Turner house until it contained fourteen rooms. The house was painted pale yellow with white trim and dark green blinds. The yard was beautified and enclosed with a white picket fence. Some of the boxwood in the yard were brought there by Lila Spilman from her Knoxville home. Henkel added the Cottage, Carriage house, and Barn.

C. V. continued to buy land until he owned over 1000 acres. The creek at the foot of the hill behind the house was dammed, stocked with fish, and a boat house was built. C. V. Henkel represented the country for five terms in the state senate and died at his Turnersburg home.

The Waldrons are the current owners of Cedarridge. Patrick Waldron has owned the home since 1981. He is an internationally known designer and artist. Many of his murals can be seen in Iredell County and many of his artworks are on the walls of the home. Both Pat and Wendy are romantics and have lovingly decorated the 1812 Hitching Post with treasures and finds that have captured their hearts. They created The 1812 Hitching Post so brides of today could still have the elegance and comfort of a wedding in a homey setting from the past.

The 1812 Hitching Post was the birthplace of four-term N. C. Lieutenant Governor W. D. Turner in 1865 and was also owned by North Carolina Senator Columbus Vance Henkel in the early to mid-1900'

We currently do not have any events for Turnersburg, North Carolina in our database. If you know of events taking place, please add the event
.

Things to do Historic Homes near Turnersburg, NC

Built in 1879, this home became the headquarters of Camp Green in 1917. Visits may be scheduled by reservation only. The hous...

The last remaining Catawba River Plantation open to the public. The 62-acre farm of James Latta consists of the original home...

This impressive house museum was once home to Dr. Josephus Hall, Chief Surgeon at the Salisbury Confederate Prison during the...