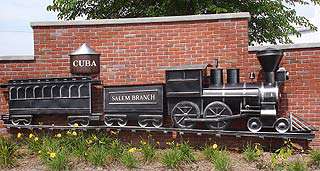 
Come visit us in Cuba, Missouri

Route 66 Mural City Adds Train Replica to Route 66 Attractions. Many of us can remember driving along Route 66

Cuba, MO is known as "Route 66 Mural City" for its 12 outdoor murals along the Route 66 Corridor in the historic uptown district. Cuba has specialty shops, interesting restaurants, and is the home of the World's Largest Route 66

Things to do Railroad History near Cuba, MO