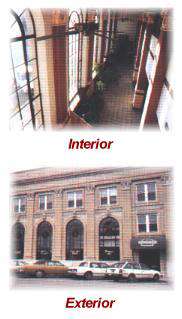 Across the street from the Newton Station stands the historic Railroad Savings and Loan Building now known as 500 Main Place. The Railroad Savings and Loan Association, organized 30 years before the bank was built in 1925, consisted of railroad men who desired a home financing agency. It grew across the state until it became one of the largest financial institutions in Kansas. The building is a fine example of American Renaissance Revival architecture. One-foot thick exterior walls conveyed the soundness and solidity of the financial institution. The structure is built of limestone, granite, marble and brass.