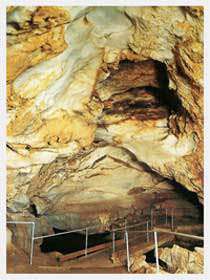 Alabaster Caverns is no exception. The State Park is home to the largest gypsum cave in the world with guided tours. Massive boulders of alabaster are seen here in many varied colors - pink, white and even a rare black. Nature created the underground site 200 million years ago when the area was covered by an inland sea. A perennial stream flowing through the cave is fed by various lateral tunnels and by seepage from the roof. What is now a tiny brook, was once a roaring river and you can still see the evidence in the sculptured gypsum formations. Geologists say the river was capable of completely filling the 2,256 foot long caverns.

But gypsum isn't all you'll see in Alabaster Caverns! There are five species of bats found in the cavern. Some are solitary while others are colonial. Roosting sites provide daytime shelter and a place for the bats not migrating to hibernate during the winter months. Only the Mexican Free-tailed bat migrates from Mexico in Spring to Alabaster Caverns to bear their young and then return to Mexico in the fall.

There are five undeveloped caves in the park that may be explored by having the required safety equipment and by obtaining a permit from the park office. This "Wildcaving" activity is only permitted March through September.

Many of the trails in Alabaster Caverns State Park lead down through the tree-lined Cedar Canyon to areas where Indians and outlaws camped and hunted many years ago. The adventurous hiker can follow one of the rugged trails to the area which was once spanned by the Natural Bridge, just one-half mile from the visitor center. An interpretive guide to the trail is available at the center.

Alabaster Caverns is truly Oklahoma from the inside out, but there's also a wonderful, scenic park waiting for your camping enjoyment.

For reservations or information:

Come visit us in Freedom, Oklahoma

Things to do Natural Attractions near Freedom, OK