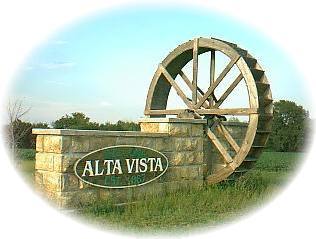 Alta Vista was not among the first towns established in Wabaunsee county. An early nearby settlement was Templin, a German community approximately five miles north of Alta Vista. The first settlers to the immediate Alta Vista area were Percival Hawes and his wife. When they arrived there were virtually no settlers between Alma and Alta Vista. The Hawes were honeymooners who arrived by ox team in August 1870.

While a handful of other settlers came into the area, Hawes played the crucial role in the decline of Templin and the birth of Alta Vista. In 1886 surveyors for the Chicago Kansas and Nebraska Railroad (which became the Rock Island) were plotting the course of the railroad and were halted at the divide of the Neosho and Kansas rivers because of the steep grade. While they considered a route that would have involved Templin, Hawes suggested that they try a draw from Mill Creek to a branch of Munkres Creek which placed the railroad station at the location of what is today Alta Vista. The settlers at the new town named it Cable City in honor of the railroad president, a Mr. Cable, but he declined the honor. Cable suggested the Spanish name Alta Vista meaning high view. By the late 1880s, the town boasted a livery stable, meat market, general merchandise store, restaurant, grocery store, and hardware store. By 1889 the first church in Alta Vista was built -- the Simpson Methodist Episcopal Church. Its early congregation included approximately 40 families.

Alta Vista added many improvements at the dawn of the Twentieth Century. One of the most important was the opening of the first bank in the town, the Alta Vista State Bank, in 1900. As early as 1891 the need for a bank in Alta Vista was recognized and local businessmen, M.L. Hull, Otto Wolgast, L.C. Johnson, A.H. Meseke, and W.C.A. Meseke banded together to accomplish this goal. Today the bank continues with its heritage of providing capital to develop businesses and farms inWabaunsee County and friendly service to all customers.

Another important addition to Alta Vista was the building of the Pearl Theatre in 1904. The building was used for a wide variety of public gatherings and public lectures, including an address by four time Presidential candidate and famous populist William Jennings Bryan.

Life in Alta Vista improved after the turn of the century. Not only did they have banking facilities and the Pearl Theatre, but increasingly modern conveniences. Alta Vista citizens enjoyed telephone service starting in 1900 and electricity starting in 1908 when a franchise was granted to the Alta Vista Light Company.

Over the years Alta Vista has changed little. It remains the small farming community that it has been for over one hundred years. The friendly small town atmosphere and relative freedom from crime make it an excellent place to raise a family or retire.

To Alta Vista calendar of events

Things to do near Alta Vista, KS

The U.S. Cavalry Museum and 1st Infantry Division Museum document the storied history of American Cavalry and the "Big Red On...