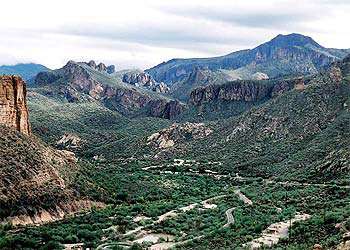 The Apache Trail Historic Road was designated a historic road on June 20, 1986, by the Arizona Department of Transportation. This historic road covers some of the most rugged terrain in Arizona. The land surrounding the road rises steeply to the north to form the Four Peaks Wilderness Area and to the south to form the Superstition Wilderness Area. Steep-sided canyons, rock outcroppings and magnificent geologic formations are all along the road. Water played a major role in creating the beauty of the area, and it also provides numerous opportunities for recreation. Fish Creek Canyon is perhaps the most awe-inspiring section. The road hangs on the side of this high-walled canyon and winds its way along tremendous precipices that sink sheer for hundreds of feet below.

The historic Apache Trail is believed to have originated as the footpath used by the Anasazi Indians to travel from the Tonto Basin area to trade with the Hohokam Indians. As settlers began farming in the lower areas, they used the same canals that had been dug by the Hohokams over 1,000 years earlier. Even with the canal system in place, the volume of water needed to support farming was never assured. The local farmers petitioned Congress for aid to construct a dam to help in obtaining consistent water flow for farming purposes.

The construction of a dam was granted, and funding for a hydroelectric facility was approved by President Theodore Roosevelt on June 17, 1902. Using the Apache Trail as the supply route for dam construction, the roadway has changed little since that time. Since the dedication of Roosevelt Dam on March 18, 1911 the Apache Trail, now a route for tourist travel, has become the story for many a tourist traveling the hairpin turns, narrow roadways, steep cliffs and deep gorges.

Along the trail adventure comes alive beginning with a lesson rich in history depicted at the Superstition Mountain Historical Society. The ghost town of Goldfield replicates the mining history of the area with activities of jeep tours, horseback riding at the OK Corral, and more, all originating at the town location.

Hiking the Superstition Mountains is a hikers dream. Trails originating at the Lost Dutchman State Park can take hikers to elevations well over 5,000 feet on trails ranging in difficulty from moderate to very difficult. The Sonoran Desert, pine trees, green grass, Indian petroglyphs, and the famous Weaver's Needle are part of the excitement. It is said that Weaver's Needle is an important piece of the Lost Dutchman Mine mystery.

Continuing along the Apache Trail, Canyon Lake, the first in a series of lakes downstream from the Roosevelt Dam, features a cantina, the Dolly steamboat, boating, fishing and camping.

Tortilla Flat, a stage stop of years gone by, is a great spot to take a break before continuing on to the town of Roosevelt.

Beyond on Highway 88, at the Tonto National Monument, visitors can hike up to ancient cliff dwellings dating back to 1400 A.D.

Continue on to the Besh-Ba-Gowah Archeological Park Ruins and Museum, and to Miami where Highway 88 comes to an end. You can return to Apache Junction via Highway 60 and pass by Boyce Thompson Arboretum, Arizona's oldest botanical garden.

As Highway 60 comes off the mountain, Peralta Trailhead is a great place for hiking and horseback riding trails. It is the site of the famous Don's Trek in March.