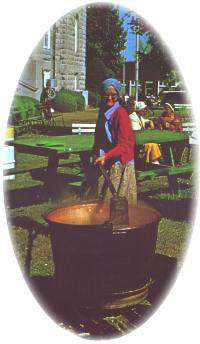 Apple Butter Makin' Days is held the 2nd weekend of October each year on the courthouse square in Mount Vernon, Missouri. Join us for three days of Food, Fun and Music!

Apple Butter Makin' Days, one of Missouri's most popular festivals, has been held on the courthouse square in Mount Vernon since 1967. The cooking takes place on the lawn of the Lawrence County Courthouse. Local people famous for making apple butter were first approached about cooking their product on the lawn during the festival. The practice became a tradition and a major attraction of the festival that has grown to be one of the largest in the state.

The apple butter is made the same way our ancestors made it. Baskets filled with apples are peeled, and before dawn open fires are built on the courthouse lawn and the long, ardurous cooking procedure begins. The huge copper kettles used have histories of their own. Some are over a hundred years old and may hold as much as 60 gallons of apple butter.

Water is added to the raw apples in the kettles, then the aromatic mixture is stirred constantly until it cooks into "butter: - anywhere from eight to 12 hours later, depending on the weather and the apples. Sugar and spices are added near the end, and the apple butter is jarred and sold to the thousands who visit each year, rain or shine, until the supply is exhausted.

Kids of all ages enjoy Apple Butter Makin' Days! The three-day schedule is designed to involve and entertain the youngsters and a wide variety of foods are provided by local organizations and churches. Hundreds of booths featuring handcrafts and artwork surround the square and adjoining side streets, along with live entertainment and old-fashioned games. The annual Apple Butter Makin' Days parade makes its rounds on Saturday morning.

Many know that Harold Bell Wright's, "Shepherd of the Hills" was the most widely read book of fiction in the history of publishing! Few know, however, that many of the places, events, and characters are based on actual models. There really was an "old shepherd of Mutton Hollow,&

Built in 1900 of native limestone, this is the third courthouse on this site. A statue of Justice graces the top of this historic landmark listed on the National Register of Historic Places. The first courthouse was built of wood in 1846

The county's first log jail burned in 1854, and a brick structure was built on Walter Street a block west of the square. It is presently undergoing reconstruction for historical preservation. It was used until 1868, and had an original cost of $3,500.

Mt. Vernon's golf course features a nine-hole course, clubhouse, and golf cart rental and storage. There are a number of active leagues, including a senior men's league and Ladies' Golf Association.

Things to do near Mt. Vernon, MO