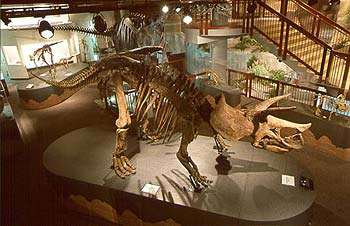 One of the premier museums in the state has established itself as "Arizona's Natural History Museum." "Dinosaur Mountain" is the largest dinosaur exhibit west of the Mississippi River. See a constantly flowing 50-foot-high indoor waterfall and hear the thrilling roar of life-size, animated dinosaurs, including a saber-tooth cat and a Columbian Mammoth. A mini-environment re-creates the Petrified Forest featuring a Cretaceous aquarium with live descendants of prehistoric creatures such as sturgeon and turtles who haven't changed in 65 million years. Also included is Hohokam Indian dwellings, a re-creation of the Lost Dutchman's Gold Mine and other changing exhibits every three to four months.

The newest addition to the Arizona Museum of Natural History is a life-size bronze dinosaur that greets visitors as they approach the facility. The 20-foot long, 2,000-pound Dilophosaur, Arizona's official state dinosaur, is the creation of Sedona-based sculptor Michael Trcic. It was commissioned and funded by the City of Mesa's Public Art Program. It is a welcome addition and a fitting landmark to commemorate the Museum's 25th anniversary.

Dinosaur Hall features more than 20 species that include some one-of-a kind
skeletons and fossils that are thus far unique to the field of aleontology. The Natural History Gallery depicts life as it was for the area's earliest inhabitants.

The Art of the Ancient Americas Gallery shows the South American influence on the area through beautiful pottery and clay figurines. A Spanish mission replica imitates the first mission built in Arizona by Father Kino.

The Territorial jail cells that were originally used in the Maricopa County Jail around the turn of the 20th century and purchased by Mesa in 1953 stand today in the very place where they temporarily housed law breakers right up until 1975.

The Arizona Highways Magazine Gallery depicts scenery from every area of our diverse state through 45 breathtaking photographs. Visitors become movie "stars" when they stand behind the "blue screen" and interact with old west characters in the Arizona and the Movies exhibit.

In the Hands-On Adventure Center families can learn about Southwestern history, paleontology and archaeology with themed make-and-take crafts.

Come visit us in Mesa, Arizona

The thirst for the thrill of America's pastime can even be quenched during the off-season! For over 50 years, Mesa has been home to the Chicago Cubs during the month of March for Spring Training.

The museum is located on the historic grounds of Mesa's last remaining schoolhouse of the early 1900s. 30,000 square feet of exhibit rooms showcase more than 4,000 collectibles ranging from antique farm equipment to domestic items, all donated by local founding families. Mesa'

The Sirrine House was built in 1896

Things to do Museums near Mesa, AZ

The story of Chandler and Arizona comes to life at the Chandler Museum with artifacts, photographs and reconstructed period r...

Museum featuring the history of Tempe from the time of prehistoric Hohokam to today. Video, hands-on exhibits, and gift shop....

Hall of Flame Museum of Firefighting