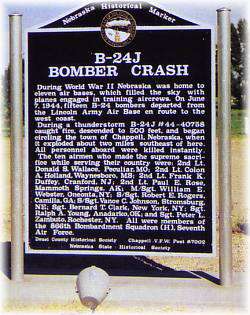 During World War II, Nebraska was home to eleven air bases, which filled the skies with planes engaged in training air crews. On June 7, 1944, a B-24J Bomber - part of a flight of 15 bombers from the 866 Bombardment Squadron (H), 7th Air Force - caught fire during a thunderstorm as it flew over the open western Nebraska prairie. The crew frantically descended to 500 feet, but the aircraft exploded just south of Chappell.


The marker was erected to honor the many bomber crews who sacrificed their lives during WWII.

Address: Chappell Exit North off I-80

We currently do not have any events for Chappell, Nebraska in our database. If you know of events taking place, please add the event
.

Things to do Memorials near Chappell, NE