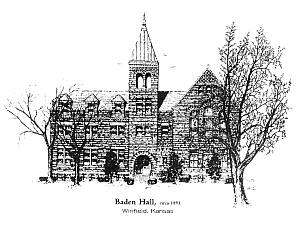 St. John's was originally housed in Baden Hall, a handsome, three-story limestone structure complete with chapel and bell tower, faculty offices, dormitory rooms and classrooms. St. John's grew into a 32-acre campus and flourished nearly 100 years before its closing in 1986. The campus was purchased by the city of Winfield in 1989 and renamed Baden Square.

Plans to create a hub of community activity have led to the refurbishing of several buildings making a new home for the Winfield Public Library and a community center with programs for senior adults, recreation and the arts. As you take this walking tour, be sure to notice the variety of architectural styles which portray the decade in which each building was built.

BADEN HALL was completed in 1894 and for many years was the college-classrooms, dormitory, dining hall, chapel, and offices. It was named for John Peter Baden, founder of the school. A very dedicated Baden Hall Preservation Committee continues to meet monthly to save this beautiful historic building.

REHWINKEL HALL - This building was completed in 1916 and served as a dormitory for men. Alfred M. Rehwinkel was president from 1928 to 1936.

MEYER HALL - Completed in 1925, this building served as the main building for classrooms, chapel and administrative offices. It was named for A.W. Meyer, St. John's College president from 1895 to 1927.

MUNSINGER HALL - The north wing was completed in 1949 and the west wing in 1953. It had served as the main dormitory for women and was named for Carl Mundinger, St. John's president from 1936 to 1959.

A total of twelve buildings and their descriptions appear in this self-guided walking tour of Baden Square. This brochure can be obtained by contacting the city of Winfield, or Convention and Tourism.

Things to do Tours near Winfield, KS

28 bronze markers have been placed through-out the city of Abilene indicating historic sites....