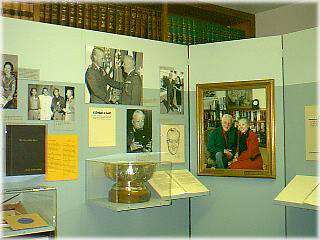 Johnson County has a very well-known citizen in the person of Col. Barney Oldfield. Col. Oldfield started his military career with an ROTC membership when he was attending the University of Nebraska where he graduated in 1933. He went on to serve for thirty years in the military. Col. Oldfield had the distinction of gaining the rank of Colonel in both the Army and the Air Force. He founded the NORAD band while stationed at NORAD in Colorado Springs, and retired from the Air Force in 1962. Col. Oldfield has worked in more than 81 countries and on every continent, working as a newspaper man, radio and TV scripter, magazine contributor, lecturer, international "ghostwriter" for famous persons and Hollywood publicist, in addition to his military career.

To learn more about the life and times of Col. Oldfield and his wife, Vada, an exhibit was created by Nebraska's State Historical Society's Lori Cox-Paul entitled "Believe It or Not" - The Life and Times of Vada and Col. Barney Oldfield. It was supposed to run for three months at the Society, but was so popular it was there nearly a year. It was to go into storage, but Judy Coe, Tecumseh, encouraged them to bring it to Tecumseh, Barney's birthplace, on "permanent loan." Two of the display panels - one with George Foreman and one with Adolf Hitler - were considered too precious to risk leaving the Society, but have since been acquired by the Tecumseh center, as well as, the enshrined uniform of Col. Oldfield. Also cherished are his bronzed paratrooper boots worn in meeting the British Royal Family in England (Queen Elizabeth was then 12), and King Christian X and Queen Fredericka of Denmark.

On the display panels are actual recordings and 50 parts-for-band sheet music for the Col. Barney Oldfield March as premiered in Carnegie Hall in 1963. There are grade school copy-book stories by him and the first script that he started "tracking Santa Claus" that has been done every year since it's mid-50s start. The "book about Adolf Hitler," one of only 100 published, was found by Barney in the rubbled Riechschancellory Hitler office after being in the first allied column entering Berlin July1, 1945.