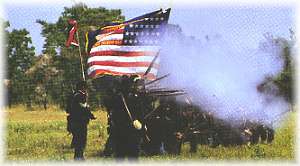 A visitor information center is located at the Battlefield along with vendors, sutler camps and civilians. Sat 9am-5pm, Sun 9am-3pm.

Friday is a free "school day," but no battle reenactment will be presented. There are 20 to 30 "stations" where reenactors discuss various aspects of life during the Civil War (ranging from military to civilian to run-away slaves).