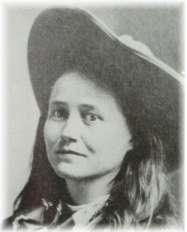 The bandit queen, Belle Starr, was one of the most notorious of the Old West. Her exploits were fictionalized in accounts in newspapers, magazines, and books. This makes it extremely difficult to separate fact from legend. The legendary Belle Starr was certainly exciting, but the real events were probably more interesting.

Myra Belle Shirley was born in Missouri in February of 1848 near the small town of Carthage. In 1858 her father, John Shirley, who had an honorary title of judge, became a tavern keeper in Carthage. Belle Shirley attended school here and evidently became a fairly accomplished pianist. She also learned about frontier life from her father's tavern, which frequently was the scene of coarse language and fights. The area was filled with tough outlaw bands.

The Civil War lent an air of respectability to the murder, robbery, rape, and destruction from some outlaw bands, particularly that of Quantrill, which indiscriminately attacked both northern and southern sympathizers. Ed Shirley, Belle's brother, became a member in Quantrill's renegade guerrilla band and in legend is referred to erroneously as a captain. At age 16, Belle Shirley became a spy for the Quantrill Band, containing the Jameses, the Youngers, the Reeds, and the Daltons. Belle was an excellent horsewoman and was considered wild. Ed Shirley was killed, Carthage was destroyed during the war, and the family moved near Dallas, Texas.

Myra Belle Shirley had a child, a girl called Pearl. in 1869, presumed to be fathered by Cole Younger. One of their legendary meeting places was Younger's Bend on the Canadian river near Eufaula. She then became the wife, or mistress, of another member of Quantrill's guerrillas, Jim Reed. She had a baby boy named Edward by Jim Reed in 1871. At times, when Reed was on the run from the authorities, he hid out at the home of a former Cherokee outlaw, Tom Starr. In 1875, Jim Reed was killed. Among Belle's later male companions were outlaws Jack Spaniard, Jim French, and Blue Duck. In 1880, Belle became the wife of Sam Starr, a son of Tom Starr. It was by this name that she was to become the legendary "Queen of the Bandits."

Belle Starr was certainly one of the most colorful women of the Old West. She had a good education and had been brought up with the manners and customs of the social elite and played the piano very well. She had courage and loyalty for her friends and was truly "Queen of the Bandits." She also had a very quick temper. Belle was an accomplished horsewoman with a small, trim, attractive figure. While not considered to have the face of a beauty, she was nonetheless an attractive woman who could attract and control men with her feminine wiles. She was a very fashionably dressed person, as her pictures show her wearing the latest fashions in women's dresses, with broad brimmed hats, and boots. She also had a quirt attached to her wrist and two six guns buckled on her waist, which tended to make her stand out in a crowd. She was considered an expert shot with pistol or rifle. She also gambled and drank in saloons. Belle would visit neighboring ranches and later saddles, bridles, livestock, or other items disappeared. Local people felt that she scouted surrounding ranches for items of value and then had her band steal them. This did not lead to friendly relations with her neighbors. She was a connoisseur of fine horses, which caused her to get into trouble with the authorities on several occasions. Legends of her banditry include a $7,000 robbery of a saloon at Fort Dodge, Kansas; a Texas bank robbery netting $30,000; and a Creek Indian robbery also estimated at $30,000.

Younger's Bend was the center of much of Belle Starr's adult life. She and Sam Starr settled on about 1000 acres (or less) in a bend of the Canadian River near Briartown on the McIntosh-Muskogee County border, which is a beautiful, rugged, hilly country covered with trees and shrubs, and tall grass, and now overlooks the Lake Eufaula Dam.

Belle often shopped in Whitefield, crossing the Canadian River on the Tom Starr or the Frank West Ferry. The road to Fort Smith went east from Whitefield. There was also a ferry across the North Canadian from Belle's property operated by Abner Brassfield.

Belle's daughter, Pearl, grew up with outlaws around the home. In 1882, when Pearl was 15 years old, her mother and Sam Starr were sentenced by Judge Parker to one year in prison for a horse theft. Pearl then became a little wild, as her mother had been.

John Middleton, a cousin of Jim Reed's ran away with Belle Starr in 1881, but he drowned crossing the Poteau River and the horse's body was found with Belle's saddle (with a red horn) on it. The following year Belle was arrested charged with robbing an Indian and for stealing the horse John Middleton had been riding and there was a warrant for Sam as well. Belle was acquitted but Sam remained at large. A posse finally found Sam and several of his friends and in the "shoot out" Sam's horse was shot and Sam injured by a shot in the head. Sam recovered consciousness and escaped from the posse. Belle talked Sam into surrendering at Fort Smith. Bond was posted and Sam, Belle, and Pearl set out for home at Youngers Bend and stopped at Whitefield where a dance was in progress. Sam Starr and Frank West, who operated the West Ferry across the Canadian, got into an argument at the dance. (Sam mistakenly thought Frank West had shot his horse when the posse tried to arrest him). Both were killed in the gunfight that followed. Sam shot Frank and, though mortally wounded, Frank fired and killed Sam Starr. Most of this story was related by Miss Lucy E. West, granddaughter of Frank West and postmistress at Briartown.

Pearl's wildness got her in trouble and she was expecting a child. She married a liveryman in Fort Worth, but they divorced and she went to Kansas. She returned to Younger's Bend to nurse Ed, her brother, when he was shot and wounded. Ed quarreled with Belle and she took a whip and beat him badly. During this time Belle also quarreled with a neighbor of theirs, Edgar Watson. Belle rode to Sans Bois on February 2, 1889, with Jim July (or Jim Starr), Sam's cousin, who was to appear on a horse rustling charge. In Whitefield, Belle's picture was taken on her horse with Jim July Starr in the background. Her return journey the next day was through Whitefield and across Hoyt's Ferry. Near Hoyt's place she was shot in the back and again in the head with a shotgun. Edgar Watson, a neighbor, was the a chief suspect but he was released for lack of evidence. Her son, Ed Reed, was also considered a suspect in Bells's death. Belle Starr was buried at Younger's Bend near the Lake Eufaula Dam on a wooded hill on her ranch. The grave is on the land of Mrs. Ada Hamilton and is open to the public for a small charge.

Pearl married Will Harrison in 1891, and they made their home at Tamaha, but temperaments clashed and Pearl left him. Meanwhile Ed Reed was sent to prison for horse stealing. Pearl went to a sporting house in Fort Smith to obtain money for Ed's release from prison. Three months later she leased a "boarding house" herself. She accumulated money and in a couple of years Ed was released through her efforts. Ed Reed took a job as a deputy marshal, but was killed in 1896 in a tavern brawl, probably in Wagoner. Pearl and one of her girls left the boarding house and built a house in the respectable part of Fort Smith and married again, but her husband died of typhoid fever in 1898 leaving her with a three-week old baby. Pearl apparently led an uneventful life from then on, and supposedly died and was buried somewhere in Arizona.

Come visit us in Stigler, Oklahoma

To Stigler calendar of events

Things to do Pioneer History near Stigler, OK