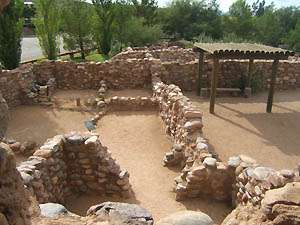 
Come visit us in Globe, Arizona

When Gila County moved its offices into the then new county courthouse in March, 1907, the county jail was housed in the rear of the ground floor. Shortly thereafter, it was apparent that the jail within the courthouse was insufficient to meet the needs of the county. On January 5, 1909

he Independent Order of Oddfellows Globe Lodge No. 6 was chartered in 1885. The brothers in good standing were the managers and other big-shots at the Old Dominion Mine. This restricted membership did not please the Grand Lodge of Arizona, so they nullified the charter of Globe Lodge No. 6

The old Gila County Courthouse is now home to the Cobre Valley Center for the Arts. This building was actually the second county courthouse built on this site. The original courthouse, completed in September 1888, was evidently inadequate to begin with. By March, 1907

To Globe calendar of events

Things to do Archaeology near Globe, AZ

Well-preserved cliff dwellings were occupied by the Salado culture during the 13th, 14th, and early 15th centuries. The peopl...

Casa Malpais, or "House of the Badlands", in the CASA MALPAIS ARCHAEOLOGICAL PARK is surrounded by unusual beauty on a rim of...

A self-guided tour through this ancient village site will show you how the native people lived here between AD 1000 and 1250....