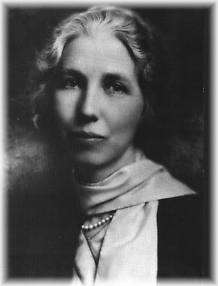 Bess Streeter Aldrich was one of Nebraska's most widely read and enjoyed authors. Her writing career spanned forty-some years, during which she published over one hundred short stories and articles, nine novels, one novella, two books of short stories, and one omnibus. In her work, she emphasized family values and recorded accurately Midwest pioneering history. One of her books, "Miss Bishop," was made into the movie, "Cheers for Miss Bishop"; and her short story, "The Silent Stars Go By," became the television show, "The Gift of Love," starring Lee Remick and Angela Lansbury. Aldrich also served as a writer and consultant in Hollywood for Paramount Pictures.


Bess Genevra Streeter was born February 17, 1881, in Cedar Falls, Iowa, the last of eight children born to James and Mary Streeter. Bess graduated in 1901 from Iowa State Normal School, now known as the University of Northern Iowa, and taught for four years. She returned to Cedar Falls and worked as Assistant Supervisor at her alma mater, receiving an advanced degree in 1906. She married Charles Sweetzer Aldrich the following year.

Charles Aldrich had graduated with a law degree from Iowa State University and had been one of the youngest captains in the Spanish-American War. Following the war, he served for years as a U.S. Commissioner in Alaska.

In 1909 the Aldriches and Bess's sister and brother-in-law, Clara and John Cobb, bought the American Exchange Bank in Elmwood, Nebraska, and moved there with the Aldrich's two-month old daughter, Bess's widowed mother, and the Cobbs. Elmwood would become the locale, by whatever name she called it, of her many short stories, and it would also be the setting for some of her books.


Aldrich had won her first writing prize at fourteen and another at seventeen, having been writing stories since childhood. However, for two years after the family moved to Elmwood, Aldrich was too busy with local activities to write. Then in 1911 she saw a fiction contest announcement in the "Ladies Home Journal" and wrote a story in a few afternoons while the baby napped.

Her story was one of six chosen from among some two thousand entries. From that time on, Aldrich wrote whenever she could find a moment between caring for her growing family and her household chores. Indeed, she commented that, in the early days, many a story was liberally sprinkled with dishwater as she jotted down words or ideas while she worked. Aldrich's first book, "Mother Mason," a compilation of short stories, was published in 1924.


In May 1925, shortly before her second book, "Rim of the Prairie," was published, Charles Aldrich died of a cerebral hemorrhage, leaving Bess a widow with four children ranging from four to sixteen. Her writing now became the means of family support; with her pen she put all the children through college.


Aldrich's short stories were as eagerly sought and read as her novels, and she became one of the best paid magazine writers of the time. Her work appeared in such magazines as "The American," "Saturday Evening Post," "Ladies Home Journal," "Collier's," "Cosmopolitan," and "McCall's." Aldrich also wrote several pieces on the art of writing, and these were published in "The Writer."


In 1934, Aldrich was awarded an Honorary Doctor of Letters from the University of Nebraska, and in 1949 she received the Iowa Authors Outstanding Contributions to Literature Award. She was posthumously inducted into the Nebraska Hall of Fame in 1973.


Aldrich moved to Lincoln, Nebraska in 1945 to be near her daughter and her daughter's family and did comparatively little writing thereafter. Bess Streeter Aldrich died in 1954 at the age of 73 and is buried beside her husband in the Elmwood Cemetery. Her legacy of books and stories remains, however, continuing to fulfill her hope that as future generations read her work they will understand the joys, the struggles, and the strengths that were all a part of pioneering in the Midwest.


For the Complete biography written by Carol Miles Petersen, contact the Museum Curator at (402) 994-3855

Things to do Arts near Elmwood, NE