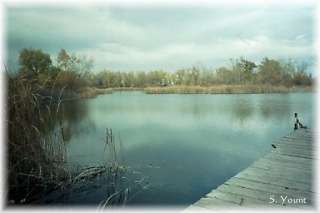 Beymer Water Recreation Park offers a variety of activities for the outdoorsman. Swimmers may cool off at the designated swim beach, while picnickers enjoy a barbecue on the many tables and grills. A covered picnic shelter is available for large parties. Reservations may be made at the County Clerk\'s Office, Kearny County Courthouse.

Fishing is a favorite pastime, with anglers seeking to catch a channel catfish or black bass stocked by the Kansas Fish and Game Commission. Fishing licenses are available locally and juveniles 16 years old and under fish free.

Overnight campers can relax in the fee area that includes electrical hookups for $10.00 per night, or can \"rough it\" in the primitive camping area. Hot showers and flush toilets are available at no charge.

Bird watching and people watching can be enjoyed, with an abundance of local species to be seen.