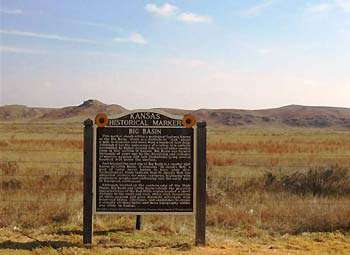 
Come visit us in Minneola, Kansas

St. Jacob's Well was a welcome spot in this arid area for early explorers and settlers as well as for drovers who used the watering hole for cattle during the long cattle drives heading for Dodge City. A stone pillar marks the highest point, affording travelers a point of reference for St. Jacob'

The Kansas Historical Marker stands within a geological feature known as the Big Basin, which is a sinkhole or "sink"

Tim's Diner is a simple stop at the intersection where food and refreshment reveals a surprising discovery - behind the log cabin exterior rests numerous wildlife mounts and dioramas, featuring moose, squirrel, beaver, rattlesnakes, prairie dogs, and much more —

Clark County Lake is nestled in a rugged area of Clark County southeast of Minneola. This 337

To Minneola calendar of events

Things to do Nature Preserves near Minneola, KS