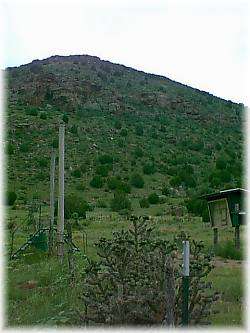 The 1,600 acre preserve protects about 60% of the mesa top in Oklahoma in addition to talus slopes and plains habitat. A native granite monument marks the highest point in Oklahoma - 4,973 feet above sea level. The Black Mesa Nature Preserve is the first major acquisition in the western part of the state by the Oklahoma Nature Conservancy, 405-426-2222.

The Black Mesa nature Preserve supports 31 state rare species (23 plants and 8 animals) and four community types. Black Mesa is a birder's paradise any time of the year. Golden eagle, scaled quail, blackbilled magpie, and pinyon jay are just a few birds that may be observed. Black bear, bobcat, mountain lion, mule deer and antelope are some of the mammals that may be seen in the Mesa region.

Hours - The Preserve is open dawn to dusk only. Allow at least four hours to walk from the parking area to the top of the mesa and back.

Directions from Boise City - Follow Highway 325 west toward Kenton. Go 35 miles to a blacktop road marked "Colorado" and turn north (right). Drive five miles to the preserve parking area on the west side of the road.

Things to do Nature Preserves near Boise City, OK