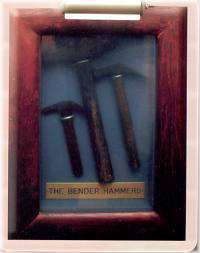 Ruthless Keepers of the Devil's Inn

"Near here are the Bender Mounds, named for the infamous Bender family, John, his wife, son, and daughter Kate, who settled here in 1871. Kate soon gained notoriety as a self proclaimed healer and spiritualist. Secretly, the four made a living through murder and robbery. Located on a main road, the Benders sold meals and supplies to travelers. Their murders were carried out by use of a canvas curtain that divided the house into two rooms. The victim was then dispatched from behind with a hammer, and the body was dropped into a basement pit through a trap door, later to be buried in an orchard. As more and more travelers disappeared, suspicion began to center on the Benders. They disappeared in the spring of 1873, shortly before inquisitive neighbors discovered the victims' bodies. The Benders are believed to have killed about a dozen people, including one child. Although stories abound, the ultimate fate of the murderous Bender family is uncertain. Some say they escaped, others that they were executed by a vengeful posse. Their story is unresolved and remains one of the greats unresolved mysteries of the old West."

- Marker erected by the Kansas State Historical Society and the Kansas Department of Transportation in the Rest Area on highways US 400 and US 169.

Three of these hammers, gifted to the museum by the Dick family of Parsons, KS, are the only remaining artifacts from the Bender homestead and are displayed in the Cherryvale Museum along with other portraits, drawings, newspaper clippings, and photos.

Things to do Notables near Cherryvale, KS