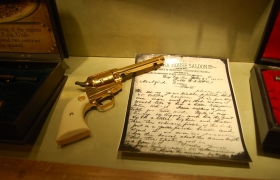 Boot Hill Museum has over 60,000 objects, photographs, and documents. The Museum has obtained these over its lifetime from donations and a limited number of purchases. Most of the items date from Dodge City's early days in the 1870's through the 1920's, and most belonged to the original residents of Dodge City. Many items were acquired by Boot Hill Museum from the Beeson Museum when it closed in 1964.