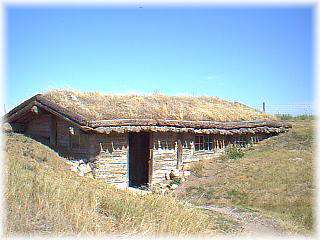 
James Bordeaux was from a French settlement near St. Louis and while yet a young boy, he went west with fur traders. Bordeaux was active in the fur trade in the vicinity of Fort Laramie from the 1830s to the 1870s. In the 1840s he arrived as host to explorer, John C. Fremont and the historian, Francis Parkman. He left his name to Bordeaux Bend near Fort Laramie, scene of the Grafton Massacre. His name also survives in the name of Bordeaux Creek, near this marker.

The Indians brought buffalo robes, furs, and ponies to this post to trade for guns, powder, beads, blankets, and whiskey. Some of the weapons may have been used against the troops at Fort Phil Kearny and Custer's troops at the Little Big Horn. The story of James Bordeaux's life is the story of the Upper Missouri country of the 1830s to 1870s.

We currently do not have any events for Crawford, Nebraska in our database. If you know of events taking place, please add the event
.

Things to do Pioneer Life near Crawford, NE