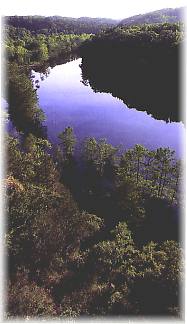 The TALLEST Mountains between the Rockies and the Smokies!

The best BOATING and CANOEING in the Midwest!

The COOLEST forests to hide your tent in!

And fall COLORS as bright as New England!

There have been several names before the name of Broken Bow. The first was Con Chito, the name of the Indain Village where the downtown business section is now located. The next was Newtown because a new town was forming with the establishment of the Choctaw Lumber Company and a influx of people who came to seek their fortunes. The Dierks brothers, Herman and Fred, were responsible for the permanent name of Broken Bow, naming it after Broken Bow, Nebraska, their home before coming to Oklahoma. The original town, consisting of 230 acres, was platted in 1911.

Things to do near Broken Bow, OK

McAlester Lake has 2,300 surface acres and 14 miles of shoreline and is equipped with two fishing docks, one is handicapped a...