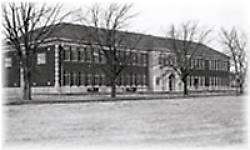 On October 26, 1992, Congress passed Public Law 102-525 establishing Brown v. Board of Education National Historic Site to commemorate the landmark Supreme Court decision aimed at ending segregation in public schools. Monroe Elementary School (17th & Monroe), and Sumner Elementary School (330 SW Western), were central to the 1954 Supreme Court case Brown vs. Topeka Board of Education, that smashed the doctrine of "seperate but equal." Both schools are listed as National Historic Landmarks.

On May 17, 1954, the Supreme Court unanimously declared that separate educational facilities are inherently unequal" and, as such, violate the 14th Amendment to the United States Constitution, which guarantees all citizens "equal protection of the laws."

The site consists of the Monroe Elementary School, one of the four segregated elementary schools for African American children in Topeka, and the adjacent grounds. Prearranged tours may be made by contacting the Topeka Convention & Visitors Bureau.

Located in downtown Topeka, the State Capitol architecture exemplifies the strength of the pioneer spirit. Dating back to 1866, the Capitol houses Kansas'

Things to do National Parks near Topeka, KS