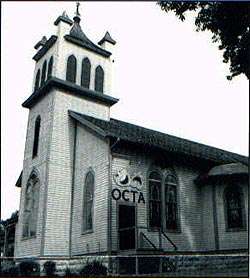 The Olathe Community Theatre Association presents six live theatrical productions a season, ranging from progressive, first-run fare to standard classics, including one musical and a children's theater production in June.

Our building was established by the Covenant Church in 1870. It is one of the oldest buildings still standing in Olathe, named after silent film star Buddy Rogers, husband of Mary Pickford. The stained glass windows in the auditorium all carry biblical themes and are the originals, over 80 years old. The one-room building was originally equipped with only coal oil lamps. Heat for the building was by coal stoves, one on either side of the altar area (now the stage).

In 1902, the building underwent its first expansion…the addition of lecture rooms to the west. These lecture rooms now serve as our lobby. Sheds were built outside, in 1905, to protect horses from the elements. Soon thereafter, the coal stoves were replaced by a coal furnace. And that was later replaced by gas. Electricity was added to the facility in 1909. The building's final expansion occurred in 1919, when a pastor's study and a kitchen were added on the north (what are now the public rest rooms).

For 105 years, the building served as home to the Covenant Church congregation.

If You Love Flowers, You'll Love the Farm! Come to the Whittaker Flower Farm in Olathe, Kansas and you'll find a field of flowers...six acres, to be exact. Everything from old fashioned Zinnias to exotic Leonotis (Lion's Ear). Over 125

Things to do Theatres near Olathe, KS