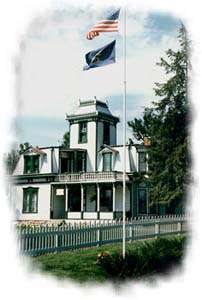 
The legacy of the life and times of the man who personified the frontier spirit lives on at Buffalo Bill Ranch State Historical Park. Cody's elegant Victorian house, built in 1886, and huge barn sit on 25 acres of what was originally a 4,000-acre spread that Cody called Scout's Rest Ranch.


The three-story house has been restored to appear much as it did when Cody occupied it. Mementos of Cody's career as an army scout, Indian fighter, buffalo hunter and Wild West promoter are displayed in his luxurious 18-room mansion which has been preserved to the finest detail. Also exhibited are dime novels and comic books featuring Buffalo Bill as well as artifacts of Sioux Indian Chief Sitting Bull, who toured one season with the Wild West Show.


The house and barn were built in 1887. The barn now features Wild West Show memorabilia, original posters, and a movie made of film clips taken at the time the show was touring throughout the United States and Europe.


The house, barn, and original outbuildings are now being preserved by the Nebraska Game and Parks Commission as a state historical park. As additional materials and information become available, interpretative displays and exhibits will be altered to reflect the fascinating story of America's most famous showman-scout.

Things to do State Historical Park near North Platte, NE