Bunnell STAGE Presents - Once Upon a Mattress 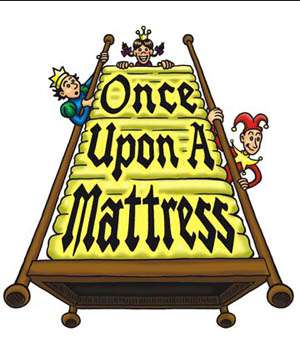 The Bunnell High School Student Theater Arts Guild of Entertainment (S.T.A.G.E.) invites you to partake in our musical production of Once Upon a Mattress, a fractured fairytale based on the classic story, "The Princess and the Pea", by Hans Christian Andersen. Our spoofed tale unfurls through a variety of robust and romantic songs , with fevers of dance and laughter: a true crowd pleaser for ALL AGES!

Once Upon a Mattress is an American musical classic. Opening on Broadway in 1959, Mattress launched the career of a young Carol Burnett in the starring role as Princess Winnifred; it was revived on Broadway in 1996 with Sarah Jessica Parker and won the Tony for Best Revival of a Musical. The witty and off-beat re-telling focuses on a royal family whose matriarch, Queen Aggravain (Mia Gaspar), has ruled that no one in the kingdom may marry before her son, Prince Dauntless (Collin Anderson). She keeps the kingdom's subjects single by ridiculously foiling every marital candidate the prince entertains.

When the noble Sir Harry (Ryne Pataki) and Lady Larken (Erin Williams) learn they are about to become parents, they set out to put an end to the queen's tyranny so that their baby may be born in wedlock. Sir Harry finds the perfect candidate for Prince Dauntless' bride in Princess Winnifred (Tiia Fischer), also known as "Fred" to her friends: an uncouth woman from the "wrong side of the swamp." With the help of Sir Harry, the Minstrel (Brian Talierco) and the Jester (Ian Jackson), she sets out to overcome Queen Aggravain and win her true love's heart.

Once Upon a Mattress is directed by Meghann England with the musical assistance of musical director/conductor Stan Wietrzychowski; choreography is directed and inspired by Sara Renstrom, a Bunnell S.T.A.G.E. alumnus. The illustrious castle and set is designed by Lawrence Farrell and constructed with the aid of Matt Kavulich and S.T.A.G.E crew. The large cast includes a plethora of S.T.A.G.E. veterans and newcomers including Amber Martinez (Lady Mabelle), Chelsea Holtz (Lady Rowena) and Courtney Mayberry (Lady Merrill); the remainder of the cast is made up of underclassmen Joey Welch (King Sextimus), Mike Peterson (Wizard), Jonelle Sedgwick (Princess No. 12, Nightingale), Stephanie Neary (Lady Lucille), and a dedicated ensemble of which the show could not go on without! So, come and take a swim through the swamp and help us choose the REAL princess....

Bunnell STAGE Presents - Once Upon a Mattress

To Stratford calendar of events

Things to do near Stratford, CT