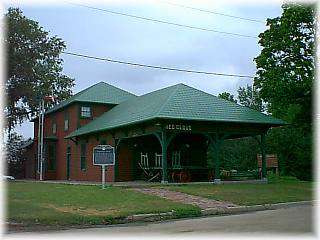 Built in 1897, the main section of Red Cloud's Burlington Depot contained sleeping quarters on the 2nd floor, and a freight room, agents offices, and waiting rooms below. The building was moved here from its site near the tracts directly south of its present location. It has been restored and donated by the Willa Cather Pioneer Memorial and Educational Foundation.

"The Burlington Railroad: Colonizing Willa Cather's Wild Land" can be found on tour of the Willa Cather historic buildings at the restored Burlington Depot.

Depots and trains played a significant role in Willa Cather's life and writings, symbolizing both escape to the world and the door through which the world came to Red Cloud.

Things to do Railroad History near Red Cloud, NE