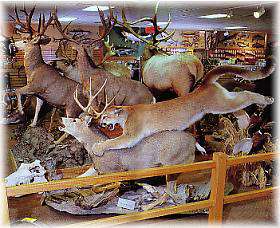 Cabela's oldest existing retail showroom, the 62,000-square-foot Sidney, Nebraska store, is filled with all the quality outdoor gear you expect from the World's Foremost Outfitter. Plus, it features incredible trophy animal mounts, educational dioramas and a large aquarium filled with fish native to Nebraska.

See over 500 trophy game mounts in lifelike settings and realistic interaction. You'll find one of the most impressive trophy collections of deer, elk, moose, bobcats, cougars, and fish west of the Smithsonian. Dedicated to the millions of sportsmen and women for their hard work and financial support of wildlife and wildlife habitat, the mounts are just one of the ways Cabela's pays tribute to the conservation efforts of its customers.

Things to do Recreation near Sidney, NE