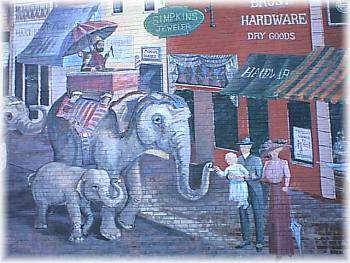 "Now these voices are stilled but their memories of the past echo in the land, especially in Jefferson County, Nebraska, for this county claims the heritage left by the Campbell brothers in the late 1800s and early 1900s."

The above words, written by local historian Estaline Carpenter, refer to the Campbell Bros. Circus, which originated in Fairbury and used the town as its wintering grounds.

The Campbell brothers, of which there were four brothers --- Al, Ed, Charlie (Doc) and Virgil-- and two were a nephew, Fred Hatfield, and a brother-in-law, Lee Greer, got their start because of a drought.

Although they had received training from professional circus performers as youngsters in Illinois, the boys' parents were reluctant to let the boys perform or start their own circus because it was not a profession looked upon with favor in the 1880s.

After several hard years of farming during a drought near Haddam, Kan., the boys were allowed to stage a circus. That was in 1889.

The second show was in Blue Rapids, Kan., within the same year, but during the next four years, some of the boys joined small circuses to gain experience while others went back to farming.

In 1894, the boys returned to the circus business, associating themselves with a medicine show. It opened in Jansen and from there the show grew. By 1889 it had over 30 wagons, 100 people and a 110' tent, along with assorted animals, including two performing elephants, a camel, lions and a zebra.

The circus disbanded in 1912, hit by Depression and a failing business.

"There were larger shows than the Great Campbell Bros., but not better," according to a newspaper article. "They are the leading amusement institution of America. Although listed third place in circus business, they are today the most popular show traveling, always receiving a hearty welcome return. The best evidence that the Campbell Bros. show is all it is claimed to be is the fact that hardly a day passes that they don't get letters from towns they have shown previously, wanting them to come again this season. They are gentlemen in the truest sense of the word. It shows what can be accomplished by dealing honorably with the public which has been their success from the very beginning."

Things to do One Of A Kinds near Fairbury, NE