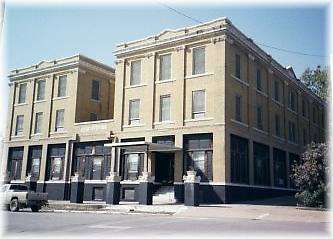 The Noweta Lodge was built by a conglomerate in 1910 and was originally named, the Campbell Hotel, which is the name appearing on the cornice of the building.

J. E. Campbell and Emma Journeycake (daughter of Delaware Chief Charles Journeycake) were married on January 17, 1878. They came from Virginia to Indian Territory in 1880, and settled in Old Alluwe with a general merchandise store and a cattle business. J.E. Campbell owned and operated one of the first general stores in Old Alluwe.

They later moved to Nowata and Mr. Campbell organized The First National Bank and owned the Campbell and Cobb Dry Goods Store. The name of the Campbell Hotel was changed to the Noweta Lodge in 1963 when it was completely refurbished.