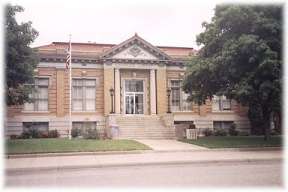 On April 1, 1914, at the spring election the voters approved the support of a public library by a vote of 3-1. In May, 1914, the Wellington City Library board held it first meeting and voted to begin the process of erecting a library building. On April 10, 1915, it was voted to buy a site from the Long-Bell Lumber Co. at the corner of Seventh Street and Jefferson Avenue for $3,500.00. The board had begun negotiations with Andrew Carnegie, and on April 19, 1915 the Carnegie Corporation stated that it would give $17,500.00 for a library building. The library building was accepted from the contractor on June 12, 1916, was dedicated June 19, 1916.

In 1986 the Library Board of Trustees. and community became involved in a project to enlarge and renew the original structure; June 6,1987, the Wellington Carnegie Library was entered in the National Register Of Historic Places; 1988 ground was broken to start the exterior shell of the addition to the building. For nearly 2 years the library was in temporary housing as the interior underwent extensive renovation. The interior of the library maintains its original open floor plan and vestibule entrance. The first floor pillars retain their marble wainscoting.


Come visit us in Wellington, Kansas

Wellington's Chisholm Trail Museum contains over 40 rooms filled with over 20,000 artifacts and pictures, most collected locally, some dating back to the Civil War and the early days cattle trail that passed west of Wellington.

The building itself is a reinforced concrete structure built in 19

Wellington Municipal Golf Course is one of the finest courses in the region! *18 Holes *Car Rental *Pro Shop

The city of Wellington, Kansas, lies just 7 miles east of the cattle trail of the 1870's that led to the largest cattle market of its time in the entire world. While those days are over 120

We hope the information given to you on this page will encourage you to visit our beautiful lake. Our lake provides a variety of recreational opportunities. PICNICING

To Wellington calendar of events

Things to do Carnegie Libraries near Wellington, KS