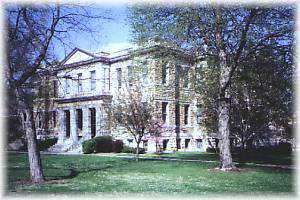 
It was designed by Baker's chemistry and physics professor William C. Bauer, who introduced steel shelving placed in stacks - rather than wood shelves around the walls - and the use of clear glass blocks in the floors and ceilings of the stack area to allow light to pass between floors for better lighting between the stacks, innovations later copied in many other Carnegie Libraries.