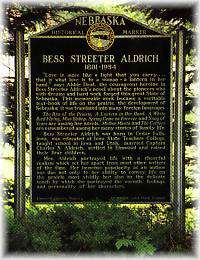 Bess Streeter Aldrich 1881-1954 - In the small town of Elmwood you will learn how a young mother moved and influenced the whole country in the first half of the twentieth century. Her writing of cheerful realism conveyed life on the prairie through the warmrth and personalities of her characters.

Company A, First Nebraska Infantry 1861-1866 - Visit this town bordered by the Missouri and Platte Rivers, where a local man organized a company of infantry, which fought in the South, then returned to the plains to protect the immigrants as they settled this area.

St. Patrick's Cemetery - On a ridge south of the Platte River lies a picturesque cemetery bordered by fields. The land for the cemetery was donated by friends when a neighbor died at an early age.

2 miles east of Hwy. 50 on Church Road, near Manley

Prehistoric Burial Site - On a high mound in Mahoney State Park you can observe how the early Indian farmers, circa 1050, showed respect for the afterlife with their burial grounds and cemeteries. The park also contains remains of the earth lodges they lived in.

Lewis and Clark Campsite, July 21, 1804 - Imagine yourself sitting by the campfire in the great valley of the Platte River, close to where it empties into the Missouri river, with a great number of wolves around. Discover where Lewis and Clark planned their exploration of the unknown territory.

U.S. 75 at the south end of the Platte River bridge, north of Plattsmouth.

Things to do Historical Markers near Elmwood, NE