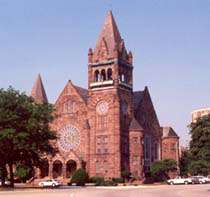 Seminary Street is one of the midwest's success stories in downtown restoration and revitalization. The National Trust'