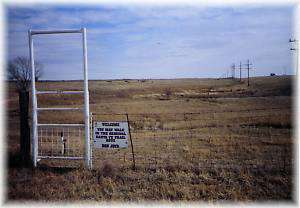 About four miles east of Lakin on highway 50 is a very good view of wagon ruts. Five sets of Santa Fe Trail ruts are easily made out. At the foot of the ruts, to the west, is a parking area with a state historical marker giving a brief description. To the immediate north-east of the parking area more ruts can be seen.