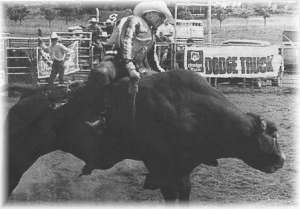 Long before white settlers came to this area, members of the Creek and Cherokee tribes were ranchers whose way of life required the western skills of rodeo. One outgrowth of this heritage is a club to which the traditional skills of the range are learned and execution of the timed events are perfect ... sometimes for pay, sometimes for fun, always for excitement.

Almost 60 years ago, a nucleus of two dozen dedicated cowboys and girls formed the McIntosh County Roundup Club that was reorganized as the Checotah Roundup Club in the late 1940s. It now owns a new arena east of Checotah where regular ropings are held Monday, Thursday and Saturday during the spring and fall seasons.


Address: The new covered facility is located 2 miles east of Checotah on Highway 266.

Things to do Rodeos near Checotah, OK