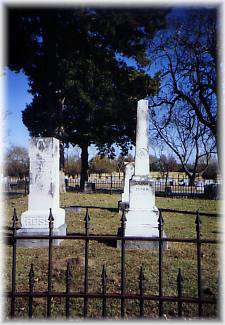 William P. Ross and other officials and dignitaries are buried in this cemetery.

William P. Ross, Executive Chief of the Cherokee Nation, was born at Lookout Mountain in Tennessee in 1820 and graduated at Princetown College. He died at Fort Gibson, I.T. July 20, 1891.