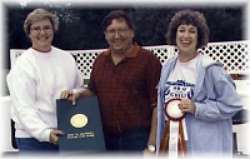 Chili and barbecue are the only menu choices on the grounds of the Lake Ponca Concession Area at the annual Cherokee Strip Chili Cook-Off and the Oklahoma State Barbecue Championship. All proceeds benefit Hospice of North Central Oklahoma. Chili and barbecue chefs arrive in Ponca City with favorite recipes and special ingredients ready to showcase their exclusive formulas. Hundreds of community volunteers make this annual event possible.

Even the young chefs market their cooking skills in the children's barbecue division. Macaroni and cheese from a box may be the recipe of choice for many young cooks, but these youth take pride in their culinary skills.

Things to do near Ponca City, OK