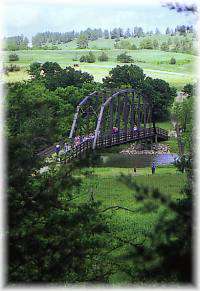 The Cherry County Commissioners began considering construction of a bridge at the Bell crossing of the
Niobrara River when they visited there in January 1902. Located twelve miles northeast of Valentine, the
crossing was situated about midway between the existing Berry and Brewer bridges. One year later the
commissioners ordered a pinned through truss from the Canton Bridge Company of Canton, Ohio. The bridge
was completed in November 1903. As one of the oldest, longest, and best-preserved of Cherry County's
remarkable group of through trusses, the Bell Bridge is an excellent example of what was once a mainstay
vehicular truss type: the pinned Pratt through truss.

The Bryan Bridge, constructed in 1932, is located on a turnout off of U.S. Highway 20/83 over the Niobrara
River about two miles southeast of Valentine. Named after Charles W. Bryan, governor of Nebraska, 1923-25 and 1931-35, the 289-foot bridge consists of a 145-foot central steel
pin-connected cantilever arch with 72-foot half-arch anchor arms at each end. Designed by Josef Sorkin, a Russian immigrant who graduated from the University of Nebraska in 1929 with a civil engineering degree, it is the only one of its kind in
Nebraska.

This steel pile bridge carries a two-track county road across the North Loup River a few miles northwest of
Brownlee in rural south-central Cherry County. Consisting of a series of steel stringers, supported by steel piles,
the bridge was erected in 1900 by the Wrought Iron Bridge Company. Since its construction the Twin Bridge
has carried intermittent traffic with only maintenance related repairs. The Twin Bridge is technologically
significant as the oldest extant steel stringer vehicular bridge identified in the state.

On February 16, 1916, the winter ice on the Niobrara River near the western edge of Cherry County began to
break up as the river's level rose quickly. The flood that resulted moved downstream, pushing the ice pack in
front of it. Before it passed through the county's eastern edge two days later, the flood had swept away fourteen
bridges and damaged or destroyed seven others. In the aftermath of the flood, a representative from the Canton
Bridge Company conferred with the county commissioners about rebuilding several of the bridges. The
commissioners visited the site of the Borman Bridge (1900) southeast of Valentine with a Canton official and
later ordered a replacement span from the Ohio-based company. Using steel rolled by Cambria, Canton erected
this pinned Pratt through truss within a month. Of the fourteen Cherry County bridges surveyed on the Niobrara
River, thirteen are medium span Pratts. Due in part to the flood, these Niobrara River bridges represent the best
preserved group of county trusses in the state. The Borman Bridge is significant as a well-documented example
of a mainstay structural type.

Built in 1899, the original Berry Bridge was one of four spans left intact over the Niobrara River after the
disastrous 1916 flood. The county commissioners approached the Nebraska State Engineer regarding state or
federal aid to replace this existing truss. State aid was approved in 1918. The Omaha- based Pioneer
Construction Company was awarded the contract and the Berry Bridge was completed in 1921. Meanwhile, the
1899 truss was moved some five miles east. The Berry Bridge, located northeast of Valentine is one of the few
remaining trusses in Nebraska built under the state aid bridge system. It is significant as a well-preserved,
long-span example of the riveted Pratt through truss; a mainstay structural type in the state in the 1910s and

In November 1898 the Cherry County Commissioners received a complaint about the deteriorated condition of
the Berry Bridge over the Niobrara River, located about fifteen miles east of Valentine. They met in special
session on the bridge, condemned it as unsafe, and in January advertised for bids for a new 150-foot steel truss
on cylinder piers. Submitting no fewer than six different plans, the Wrought Iron Bridge Company received the
contract. Work began on the bridge in the spring of 1899 and was completed by October of that year. The truss
functioned in place for over three decades before the county replaced it with a heavier span (the Berry State Aid
Bridge) in 1921. The 1899 span was then moved to the site of the old Brewer Bridge, a casualty of flooding five
years earlier. Here it has carried infrequent traffic as the oldest of Cherry County's trusses.