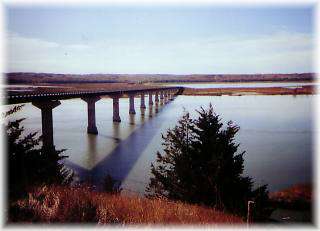 The "Chief Standing Bear Memorial Bridge" over the
Missouri River is approximately 3000 feet long and 80
feet high over the river on the South Dakota side. It links
Niobrara with South Dakota with about a 60 mile drive
straight north to Mitchell, connecting Nebraska's
Highway 14 with South Dakota's Highway 37.