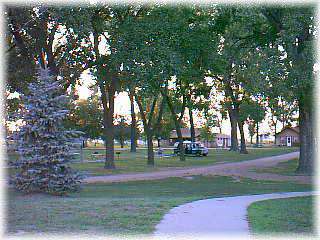 Lafayette Park:
This shady park offers a place to relax, picnic and camp with full hookups, showers, and sanitary dump facilities. Enjoy the beauty of the nearby Lake Helen Recreation Area just across the canal by way of the covered foot bridge.

North edge of Gothenburg along Highway 47 and 27th Street.

Ehmen Park:
Reverend William Ehmen came to this area in March 1879 as an agent for the Union Pacific Railroad. The Ehmen homestead extended from what is now lake Avenue to the east. Ehmen was instrumental in attracting German settlers to this area from the eastern states. His family set aside an entire block in 1890 to be the city park. This park offers covered picnic shelters, a playground, the Pony Express Station and carriage rides. Relax at this park bordered by historic homes each with its own story.

Between 15th and 16th Streets and Lake Avenue and Avenue F


E. G. West Park:
E. G. West, a native of Sweden, came to Dawson County in 1882. He became a prominent businessman dealing in lumber, hardware and coal. A park to honor his contributions to the community at one time featured a goldfish pond and beautiful landscaped gardens. No goldfish can be found today, but it provides a great escape to relax with tennis courts, play equipment for the children and pleasant surroundings.

Things to do RV Parks near Gothenburg, NE