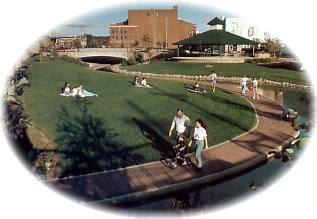 Hutchinson, Kansas in Reno County is an area with a unique history, rich heritage and vision for the 21st century. Unlike the "wild west" reputation of other Kansas towns, Hutchinson's founder, C.C. Hutchinson, was determined to populate "his" town with only those persons of "high moral fiber."

After making an agreement in 1871 with the Santa Fe Railroad to develop a community at the point the railroad crossed the Little Arkansas River, Hutchinson began selling lots, each with a deed containing a clause forbidding the sale of liquor for three years. He further convinced the State Legislature to divert cattle drives around the county, thus keeping the rowdy cowpokes out of town.

The grain industry took off when Russian Mennonite farmers introduced Turkey Red Wheat to the Kansas prairie in 1875. Booming wheat production and the confluence of three railroads contributed to making Hutchinson the hub of the wheat market. Railroads played a significant role in the development of smaller towns in the county.

In 1887, a prospector was disappointed to find salt in South Hutchinson while searching for oil. Others capitalized on the discovery; however, and salt extraction remains one of the area's largest industries.

By 1913, the State Fair was an important annual event. Today, the Fair draws hundreds of thousands of visitors each year.

The grocery business has also been important to the community's growth. J.S. Dillon opened his first store in the 1920's. Over time the company became Dillons and has since grown to over 200 stores statewide. The company, now a division of Kroger, Inc., still maintains a distribution center and headquarters in town.

During World War II and the following decade, Reno County was home to the Hutchinson Naval Air Station located southeast of Hutchinson where flight training for Naval pilots was conducted. The site is now an industrial tract with a variety of businesses.

From pioneers of westward expansion to the explorers of space, history is being preserved in this Midwestern town. The Reno County Museum holds the history of the past while the Kansas Cosmosphere and Space Center in Hutchinson is quickly becoming the most comprehensive space museum in the world. Named one of the first affiliates of the Smithsonian Institution, the Cosmosphere's Hall of Space Museum brings the Space Race to life, from the ominous beep of Sputnik to the chilling symbolism of the German Wall to the victorious planting of the American flag on the Moon.

At Hutchinson, hold on tight, "You're go for lift off!"

Things to do near Hutchinson, KS

Join us for the 2nd Annual Zombie Fest! This year we're bringing more to the table and moving it to Athletic Park, adding mor...