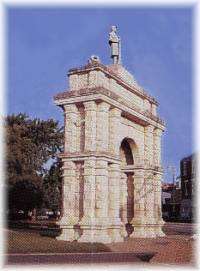 On September 8, 1898 the memorial was dedicated, and for many years the arch has stood guard over the northeast entrance to the park. Erected as a memorial to those who gave their lives in the War between the States, the monument was planned and carried out by the veterans of the Grand Army and stands as a symbol of the close relationship that has long existed between Junction City and the Military.