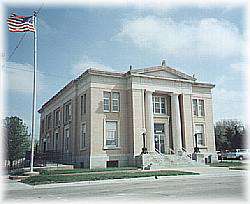 The Clay Center Post Office is a stately building built in 1911.

The Civil War Memorial erected in 1911 is dedicated to those who fought in the war between the states, and proudly graces the courthouse square on the west side of the historic courthouse.

The Clay Center Municipal Band Shell was built in 1934, it is a W.P.A. project and is on the Kansas Register of Historic Places. The Band Shell hosts many City Band Concerts throughout the year.

The Clay County Museum is housed in the former Clay Center Hospital building constructed in 1925. The structure served as a nursing home before it became the location of the museum in 1975.

The Clay County Courthouse at Clay Center was constructed in 1900-1901 on land donated in the 1860's for use as a public square by the town's founder, Alfonzo F. Dexter.

Things to do Historic Buildings near Clay Center, KS