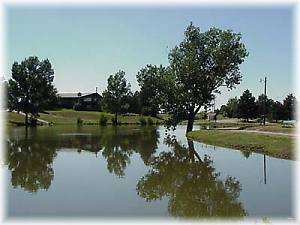 Playground equipment, picnic shelters, disc golf and fishing can be accessed on the east side of south Highway #25 (Range Avenue).

Buffalo Park - There are 20 acres of land located between Pine and Cedar Streets on both the east and west sides of Franklin Avenue which makes up Buffalo Park. This area is an important drainageway through Colby when the community receives substantial rain; however, improvements include a playground and gazebo for use by citizens and visitors.

Young Memorial Park is 38 acres in the northeast part of Colby and is used primarily for baseball, softball, and soccer. This park is maintained by the City and the Recreation Department for the enjoyment of local citizens and as a host site for tournaments.

Come visit us in Colby, Kansas

The Eller House, displaying typical furniture, clothing, and objects, tells of farm life in the 1930s. The house was built in 1906 in Colby, was moved to a farm south of town in 1917 and was moved to the museum site in 1981.

The Lone Star Presbyterian Church denotes the strong religious faith of the settlers. The Charming white country church was built in 1915 north of Gem, Kansas. In 1988, the building was moved to the museum site. It was the third time the building had been moved.

The Cooper Barn is one of the largest barns in Kansas and holds a wealth of Thomas County History. The cattle barn was built in 1936 and was part of the Foster Farms operation. The barn is 66 feet wide, 114 feet long and 48 feet high. It was moved to the site in 1992 and houses the exhibit "

The Museum has been dubbed "one of the finest museums in the Midwest" by KANSAS!

To Colby calendar of events

Things to do Recreation near Colby, KS